Many newbies are confused about how PostgreSQL dump and restore work. And even more questions appeared about version mismatches of the server itself and tools used. After fresh PostgresDAC release we’ve faced with the same questions.

Utilities used for dump and restore are called pg_dump and pg_restore respectively. Delphi developers may use TPSQLDump and TPSQLRestore components which are fully compatible with native tools.

So here I’m trying to create some kind of a FAQ.

Let’s assume version is a concatenation of Major, Minor and Build numbers separated by dots, e.g. 9.3.2

Q: Can I downgrade the database version, e.g. from 9.3 to 8.4?
A: If you mean official supported way of doing this, then no, you can’t. You may however use pg_dump in plain text output mode and manually fix all incompatibilities.

Q: Can I create dump of old server with new pg_dump?
A: Yes, sure. All versions since 7.0 are supported now. But if you use custom format, be ready the same or higher version of pg_restore will be needed.

Q: What if I want to restore custom dump archive to the old server anyway?
A: You should use pg_restore to generate plain SQL script, manually edit it to fix version mismatches.

Q: Will pg_restore “understand” archives of newer versions of pg_dump?
A: No. The rule is simple: pg_restore will work with pg_dump output of the same major and minor version or lower, e.g. pg_restore v9.3.x will understand pg_dump output v9.3.x, 9.2.x, 9.1.x, 8.x etc. and will not work with output from versions like 9.4.x.

Q: Can I use new output format of the pg_dump with old server version, e.g. directory output for 8.4 server?
A: Yes, you can.

Q: Can I use new parallel functionality with old servers?
A: Yes, you can, but there is a limitation for pre-9.2 servers. See description for –no-synchronized-snapshots parameter.

There are a lot of tools for PostgreSQL development. I want to propose you one more. Why Lazarus:

Go to Lazarus at SourceForge.

Here are the screen shots of the installation process where you can see what I had chosen:

I have Lazarus installed into C:\lazarus\ and hereafter I will use this path.

Now it’s time for PostgresDAC. At the moment many Laarus IDE functions require the source and warns if the source of a unit is missing. Thus we need PostgresDAC with sources version. Sources are available for licensed users in their profile.

Install PostgresDAC into the IDE

In the Lazarus IDE choose open package and select dclPostgresDACL.lpk. This is the design time package. Then in the Package window choose Use → Install. 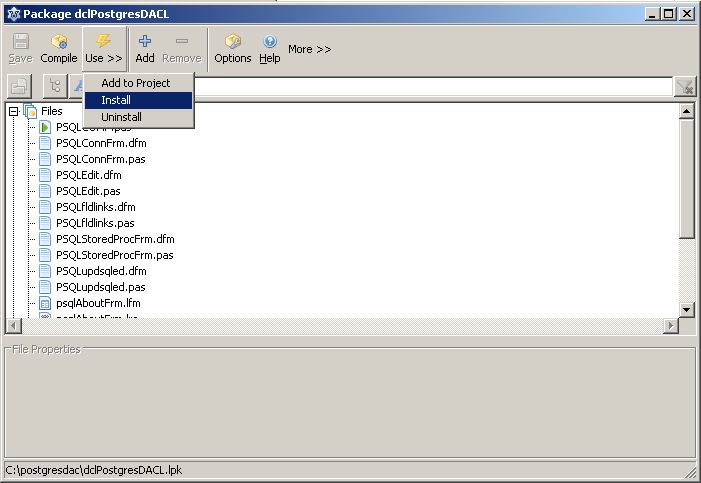 Confirmation about rebuild will appear.

Choose “Yes”. Wait for some time. After successful rebuild Lazarus will reopen itself. Tada! We got it!

Now we may open some demo projects and play some time.

I was playing with some unit tests for PostgresDAC recently. And one test case was to check TPSQLDataset.Locate routine which allows partial-string and case-sensitive matching options. So I want to have some test result set with integer and text columns. The simplest for me are numbers in both representations: using digits and using words, e.g.

Since I hadn’t much spare time I used nice VALUES command:

I did my task well. However I was wondering is there any built-in function in PostgreSQL which may convert integer to such words representation. The answer is: not exactly.

I found some references to cash_words function. But there is no any information (except entry in 7.3 release notes) in the official documents. The use case is quite simple:

I’m fine with this result set, who needs only numbers may trim values using standard functions.

PS In case someone wants to create his own implementation using C (or plpgsql, who knows), cash_words function may be found in the \src\backend\utils\adt\cash.c file. It uses num_word private routine.

As some probably know Delphi XE2 now have compilers for Win32, Win64, Mac and iOS. And as you probably guessed, we were inundated with questions from our customers about support for this zoo in our DACs.

Frankly speaking this situation is perfectly described in Joel’s Spolsky “Fire and motion”. We thought: “This just can’t be done in a sane time!”

However “you never know what you can do till you try” and “the devil is not so black as he is painted”. So we decided to port PostgresDAC first. The main reason was the using of libpq.dll client library, which may be built for a huge amount of target platforms.

Thus we don’t need to worry about low-level network routines and may pay the whole of the attention to the middle layer, have no idea how to name it.

As for Win64 platform, then were no problems at all. We’ve prepared x64 deploy libraries and we done with it. There were no dangerous places in our source code were address arithmetics may produce unsuspected behavior. This simplicity is understandable. We just stayed within one Windows platform in general.

Then it was Mac’s turn. When we started I have never seen MacOS before… That was scary move. Especially for my self-esteem. 🙂

We crossed the fingers, chose OS X as the target platform and the fun began. I knew our code was Windows-centric, but I was so far from the real understanding of the scope of the tragedy. 🙂

Here is the seven deadly sins for the cross-platform library written in Delphi:

1. Using of Windows unit is prohibited. The only things you have are System ans SysUtils. Deal with it!

3. Using of forms is prohibited. So no custom dialogs, message boxes etc. You have no idea under which platform library is built. Well, this is so true for console application too. That’s why we’ve removed annoying trial screen.

5. Using of messages, window procedures, handles, file mappings and other Win-shit is prohibited. That’s why our TPSQLMonitor is still useless for Mac. We need to rewrite it from scratch. And we ready for it.

6. Use correct type naming, e.g. LongWord instead of DWORD.

7. Use proper functions or implement them for all platforms. No place for ZeroMemory, CopyMemory, GetTickCount on Mac etc.

You know, when I wrote the number of seven I didn’t think that I’m so damn write! Of course in your case there may be dozen of others incompatibilities. That was just a joke. 🙂

Everybody is welcome to use “Christmas” coupon code till January 14 for 20% discount on any product from MicroOLAP Technologies including the most robust Database Designer for PostgreSQL and PostgresDAC component suite.

From all of us at MicroOLAP, we wish you happy holidays and a prosperous new year!